When This American Life on Chicago's WBEZ (NPR) played a show containing segments or "acts" about an entire family who for years around Thanksgiving time tiptoed around a hand puppet duck by calling the main attraction at the holiday meal a "fish," and a turkey farm in which a girl, her sister and her father spent frantic minutes trying to save the family's livelihood from drowning themselves by raising their heads and opening their mouths to swallow the deluge of rain pouring down, I bet no one realized that some fourteen or fifteen years later, they would still be finding -- probably with little difficulty -- poultry stories to tell.  This year, as I listened to "Poultry Slam 2011" on the way from Chicago to Dixon (while everyone in a 40-mile radius of Downtown Dixon was enjoying its Christmas Walk), I could picture items we have sold at Books on First which made perfect complements to the acts. 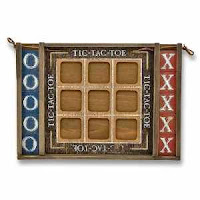 For Act One, "Witness for the Barbecue-tion," I thought about Melissa & Doug's Tic-Tac-Toe game, wonderful for children, adults and chickens.  Sure, a tree was killed, but unlike paper, the game is re-usable and it sure beats having to find a pen or pencil.  Besides, I have never seen a chicken hold a pencil properly.

For Act Two, about a wild turkey terrorizing a Martha Vineyard neighborhood, I thought of all kinds of books, but the one that stuck is not about a turkey, but about a giant chicken.  A science experiment gone a little wild, Henrietta was just trying to play with the neighborhood kids, just like Tom Turkey who looked so cute playing hide-n-seek with the deliveryman who was scared "sh-tless" of the giant fowl.  Daniel Pinkwater's The Hoboken Chicken Emergency is a 33-year old classic.

I have to say, though, I don't understand the average person's skepticism about terrorizing turkeys.  What makes them so lovable that it's impossible to imagine them to be mean or nasty?  I was terrorized by one of our male turkeys who kept me from exiting my car after I arrived home from Chicago, jumped on my thigh and made me stave it off with a long walking staff that someone had made and presented to Larry.  Once, the cleaning lady called Larry from her car and apologized for not being able to go into the house to work, because the tom wouldn't let her out of her car.  Larry would not believe me until he saw the tom jump me.  When he came to scold the turkey, the tom started chasing him.  Even then, Larry hated to part with the turkey.  Normally, when a rooster attacked someone, especially a child, it went into the pot immediately for stock.  Our tom was way too old and big for that noble end; it was eventually given away to someone who either thought he could handle this turkey or did not believe it could be a bully.

For Act Three, "Latin Liver," about a natural way to raise geese with enormous livers for producing foie gras, I naturally thought of Mark Caro's The Foie Gras Wars, which begs the question: why are animal rights activist so focused on a slightly greater than 0% minority in the abused food animal world when there are so many other food animals being inhumanely bred, raised and slaughtered -- like those hogs in the confine just a mile from where we live.  Producers in Caro's book contend that the process of gavage, or force feeding, geese to grow their livers to massive proportions might look abusive, but really, the geese don't mind.

And then, there are the sharks who are left to fend for themselves after their fins are cut off for shark fin soup.  I love a well-made Chinese shark fin soup, but those horror stories of wildlife abuse have certainly led to a dearth of that offering in restaurants and at banquets.  I love liver made right, too.  In Paris, we bought a couple of jars of duck liver from a woman who had her own duck farm and sold the resulting foodstuffs out of a windowless little shop on the Ile de la citè.  It was fantastic (and probably not healthy for my liver), so I might imagine how heavenly true foie gras would be.