While catching up on a few chores this weekend, I heard a slice of NPR's "Wait, Wait, Don't Tell Me," the radio network's weekend quiz show with a panel of humorists, host and scorekeeper/announcer.  Usually based in Chicago, this weekend, the show was on the road to San Francisco, where a guest celebrity was Tom Keller of Napa Valley restaurant The French Laundry. When Keller came, he brought food for the panel and host, a little something that every guest to The French Laundry receives before his meal: the coronet of Atlantic salmon -- which to everyone looks like a tiny ice cream cone -- with (along with the salmon and cone-shaped cracker) creme fraiche, sweet red onions and little chive jimmies.

Jimmies!  Where I grew up in West Babylon on Long Island, NY, those miniature chocolate or multi-colored hard sugar pellets usually found atop ice cream, frosted cupcakes and cookies were called "sprinkles," as they were sprinkled on the dessert.  When I arrived at Vassar in Poughkeepsie and ventured out to the soda fountain at College Drug on Raymond Avenue where for an additional 25 cents, one can get jimmies on her ice cream cone.  When I first saw the word on the board, I intuitively knew what that word meant, what it represented, but still asked, because I thought I might be wrong, that jimmies were different and maybe something more special than mere sprinkles.  Well, yes and no, that word "jimmies" does not represent anything more special than "sprinkles," but the word itself, so homey, so fun, so cant.  This word "jimmies" is special.  From that moment on, what is sprinkled on ice cream are called "jimmies."  And obviously, what is sprinkled on coronets of Atlantic salmon too are called jimmies, be they chives and not chocolate. 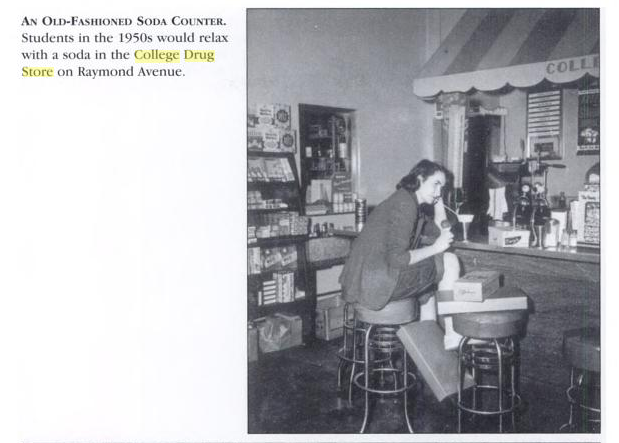