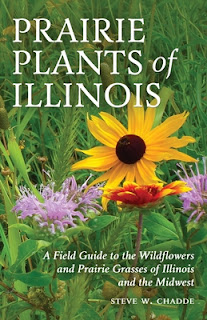 On Sunday, 24 April 2022, for the first time in two years, the Prairie Preservation Society of Ogle County (PPSOC) had its annual banquet to raise money and awareness about the state of prairie around us and efforts to preserve it.  Following tradition, the event would be mingling and buying of prairie plants and other locally provided products, bidding on silent auction items, having a family style dinner of either turkey with all the trimmings or vegetarian Moroccan stew (the wheat rolls, green beans and mashed potatoes are made vegan), and then, convening to hear a brief update of what is happening with the Society and to be enlightened by a guest speaker.

Each year, Larry had gathered together books for sale, keeping in mind the theme of the guest speaker as well as what had been bought in the past and what might interest current year participants.  I would help set up and break down as well as spend time bidding on silent auction items.  Sometimes, brother Pat would attend also.  I missed an earlier emsg from event organizer Lin Vogl asking if I would be attending, but saw a follow-up message this past week.  I had not had time (or ability) to organize like Larry would have and while regretting not seeing some people I hadn't seen for a long time, I also didn't want to attend alone.  So, I said, no, I wouldn't be able to set up a table to sell books.  Upon Lin inviting me to be their guest to dinner, I relented and thought, "Well, if I'm going to be coming to dinner, I'll just throw a few books together from what's on the shelf." As anticipated, I felt a little lonely, although I did get to speak briefly with a customer whose son has come sing at Books on First several times.  Several people thanked me for being there with books.  I bid on some items, including the big bag of prairie plant seeds which I hoped someone would outbid me (because I couldn't figure out how I was going to scatter them in the best way).  I sold a few books, not all that I hoped, but a few which needed this exposure.  And, there were a few people, new to the area or the Society who had not known about Books on First.

The guest speaker was the first and only full-time employee of a two-year old organization, Amy Doll, Director of Friends of Illinois Natural Preserves.  She spoke of advocacy and how to get the word out about getting involved.  Stop using the Latin name for plants.  Hit people at home about how few acres of quality natural prairie there is.  How simply moving prairie is not the same as preserving the space which has thousands of years of microbes and other elements in the soil, the plants and even the ways for bird and animal travel.  Of extreme interest to us in the northwestern Illinois region is the status of remnant prairie known as the Big Bowl Prairie, which is currently in danger of being destroyed to expand and make "safe" the Rockford airport, which is currently rapidly growing as a cargo transport hub.  Before I made the judicious decision to leave (and find my mobile which I knew I didn't have, bas I couldn't find it to turn off at the beginning of the presentation), I hear the troubling response to the question, "How much prairie are we talking about?" This is after having heard that Illinois has lost 99.9% of the prairieland that it had in the 1800s.  The answer is that since the Rockford construction started and temporarily halted, the Big Bowl Prairie was reduced from 23 acres to 14 acres.  And, the proposed road that goes directly from the highway to the cargo warehouse would plow down the middle, through 5 acres of the most quality prairie of the site.  What can we do to ensure the future biodiversity of life on earth?